This blog posts discusses the design and performance implications of using bitmaps to mark null values instead of sentinel values (or special values like NaN).

Depending on who you talk to, one controversial aspect of the Apache Arrow columnar format is the fact that it uses a validity bitmap to mark value as null or not null. Here's the basic idea:

There's some nice benefits of the bitmap approach:

Still, for systems like R which use special values to mark nulls, bitmaps can be controversial. The argument sometimes centers on the performance implications of having to check bits rather than comparing a value with INT32_MIN or checking if it is NaN. It is also noted that NaN values are propagated automatically by the CPU in arithmetic operations, so propagating nulls in the bitmap case will be necessarily slower.

From the perspective of databases and data warehousing, reserving certain values to mark a null (or NA) is widely considered unacceptable. NaN is valid data, as is INT32_MIN and other common values used as sentinels.

Most SQL systems store the null-ness of value using an extra bit or byte. File formats like Apache Avro and Parquet have a separate null/not-null encoding.

Are sentinel values faster than bitmaps (for analytics)?

To show that the performance argument against bitmaps is not persuasive, I wrote some in-memory performance benchmarks (I would like to do some experiments with large memory-mapped datasets). To keep things simple, let's consider the sum operation which must aggregate all of the non-null values in an array. We also will track the non-null count.

To keep track of the results of a sum, I use a simple struct, templated on the type of the values:

Let's consider double precision floating point values, where NaN is a common sentinel value. So a sum function for double is:

If we represent nulls with bits, we could write the sum naively like so:

It's possible to go much faster using bitmaps with a few optimization techniques:

Here's the meat of this new vectorized sum algorithm:

To give a fair comparison with a sum without nulls, I also wrote similar versions of this that sums 8 values at a time in the non-nullable case and NaN sentinel value case. I also added the same benchmark with int64 values using INT64_MIN as the sentinel value in case integer operations perform differently from floating point operations.

Complete benchmarking code is here. Here are the performance results for the 3 cases there there are 0%, 10%, and 50% nulls, respectively. The size of the array being summed is 10 million values. The machine is my Xeon E3-1505M Linux laptop.

It's definitely possible that I'm doing something suboptimal in my implementations. I would love to hear from algorithms experts! 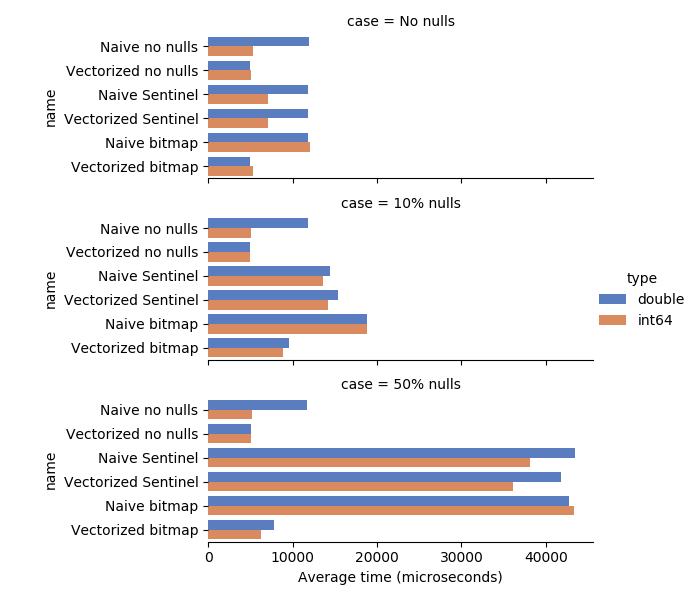 Some observations on these benchmark results:

Using a bit- or byte-based masked null representation is a requirement for a common memory format to be accepted by database systems as well as data science libraries, so using sentinel values at all is not really an option in a project like Apache Arrow. But, in many cases, using bitmaps allows faster algorithms to be developed that are not possible with the sentinel value-based null representation used in pandas and R.

I'm not a perfect programmer, so I'll be interested to see what other kinds of optimizations others can cook up. Take a look at the benchmark code!